Why do you need the SCORM Offline Player?

The SCORM standard has been widely adopted across industries, making it the de facto e-Learning standard. However, the SCORM standard’s inadequacies have surfaced stronger with the emergence of new technology and changing needs. Though you may have invested a lot in the creation of SCORM content, there are far too many scenarios that adjudge SCORM to be outdated. This is exactly where the SCORM Offline Player comes in.

The SCORM Offline Player enhances the way training content is delivered, supported and managed. It works on three fronts:

The SCORM Offline Player is designed to allow SCORM-compliant courses to run across mobile devices. The very idea about this product emerged from repeated demands from customers, about making their courses more accessible.

The SCORM Offline Player also brings in the option of running the course content, completely offline. Our customers voiced their needs about the devices being the primary source of content consumption for their users.

In that case, the evaluations showed that even if mobile technology had moved fast and gifted mankind with powerful handheld devices, the carriers themselves lacked the same penetration. Offline access hence became an important feature for the product to have. 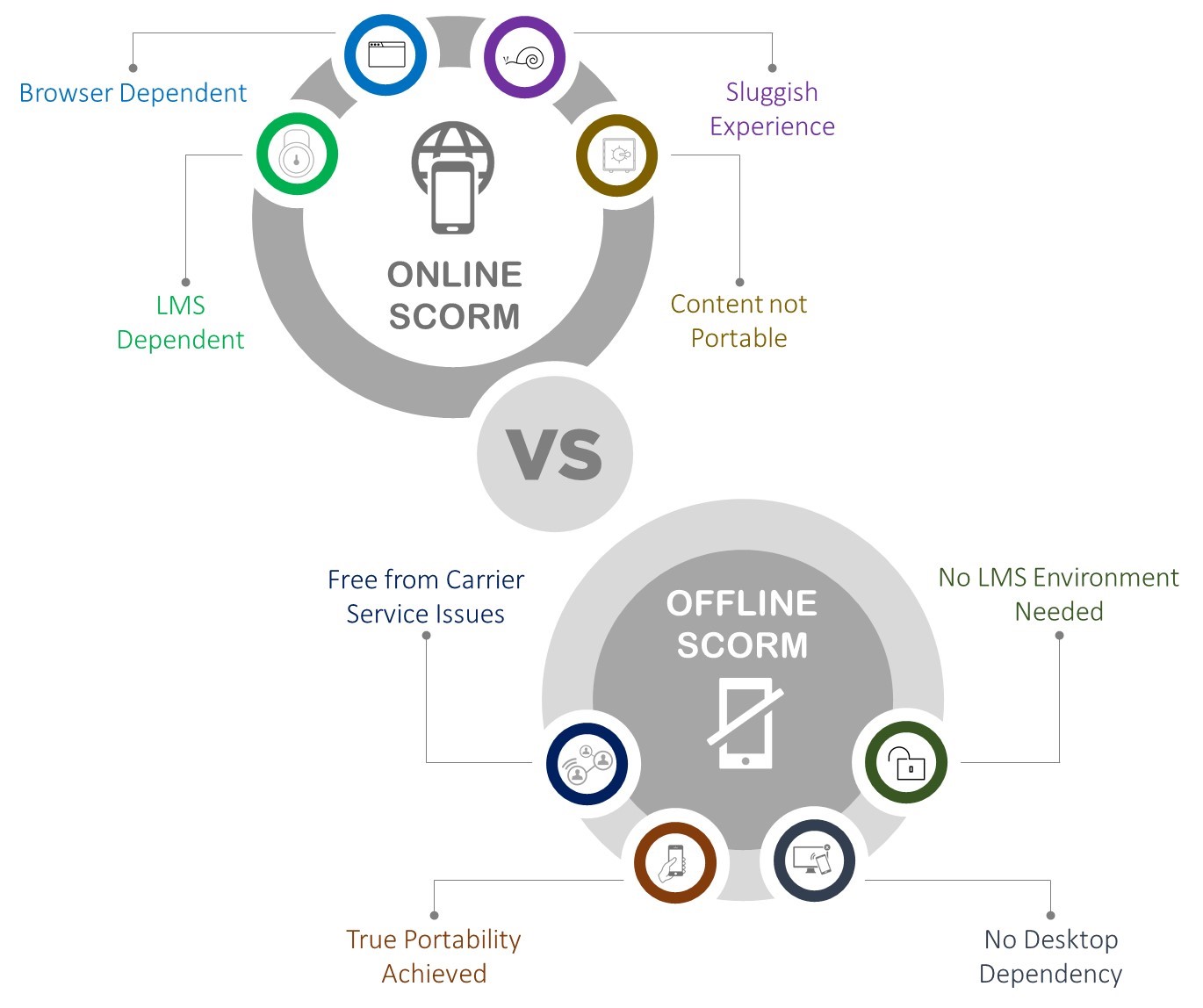 The SCORM Offline Player ingests SCORM courses, generating offline-enabled mobile apps and the SCORM tracking information from the course. The entire management of the courses and the apps themselves happen on a backend portal.

The portal is responsible for maintaining the users who are authenticated to access the courses.

The overall user experience of the SCORM content also received a face-lift in many cases. Earlier, the SCORM content would have to be fetched request-by-request and hence, the loading time would slow down the overall speed and hamper experience. With the SCORM Course-apps, the entire SCORM content was in one device, cached in it. Hence the course behaved much better to user interaction and any waiting time, if before, was eliminated. The browser dependencies were also removed. Due to the technology involved in creating the mobile applications, the apps were able to run on any of the wide range of devices prevalent in the market today.

4. How does the SCORM Offline Player differ from its predecessors and competitors?

The SCORM Offline Player offers a greater range of functionality at a much lower cost, to make sure, everyone has an opportunity to benefit from the features.

1. The predecessors to the SCORM Offline Player require installation of more engines, backend systems and other softwares, to make it work. This draws out a huge budget to make the SCORM courses work offline. Such a magnitude of investment doesn’t allow organisations of all types and sizes to opt for this technology.

2. In other cases, the players do not work across mobile devices, but only across desktop devices. While the SCORM Offline Player doesn’t work across desktops, but only on mobiles, it is a better design choice. The offline feature and true course content portability is achieved when we move outside the browser. The offline feature on desktops doesn’t let the content reach to users who never may access a laptop or desktop in their lifetime.

3. Certain competition also offers limited integration to LMSs and favour certain LMSs over certain others. The SCORM Offline Player does away with any preference or inclination towards any LMS, open-source or proprietary. The tracked SCORM parameters are exposed in the form of an API, which can be accessed by any LMS to pull the data and update the records. This sort of ‘open-hook’ design makes it more useful and LMS agnostic.

5. Why must you use the SCORM Offline Player?

The SCORM Offline Player envisions to bring the next paradigm shift in e-Learning. Through its powerful m-Learning features, tracking, and ease-of-use, it aims to help customers across all domains get their content reached as far as possible. The limitations of machine and network would be circumvented completely. Supporting more standards and platforms, the number of people impacted by this innovation would be noteworthy.

To learn more, write to us at info@e-zest.com.